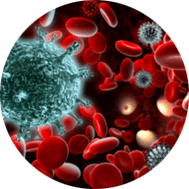 Sepsis is an inflammatory reaction that occurs when the body releases chemicals into the bloodstream to fight an infection. 1  It most commonly occurs in people with a weakened immune system, but it can happen to anyone.  This condition can be life-threatening as it can cause damage to organs, and even lead to organ failure and death if not treated in a timely manner. 2

Sepsis is a costly condition that affects more than 30 million people worldwide each year and accounts for roughly 6 million deaths.3

Early detection and treatment of sepsis can be the difference between life and death, making it a crucial element in reducing patient morbidity and mortality.  Early treatment of sepsis also decreases the hospital length of stay and reduces the total cost of hospital care per case.